Montreal, Quebec, May 28, 2021 – Vior Inc. (“Vior” or the “Corporation”) (TSX-V: VIO, FRA: VL51, OTC: SXMVF) is pleased to announce that it has begun an extensive summer field exploration program at its Belleterre and Skyfall gold projects in Quebec. Vior is also pleased to report the strengthening of its exploration team.

The 2021 field exploration program will consist of an extensive prospecting campaign at Belleterre and Skyfall, the Corporationcompany’s two major district-scale gold projects. A field crew of seven geologists will be active on the field until the end of August, along with additional workers mobilized to perform soil and till surveys.

“We are extremely excited to begin the field work programs at our two highly prospective district-scale gold projects in Quebec. We have assembled an outstanding field crew and we will anxiously await the results from these programs, which will form a basis for our proposed Fall and Winter drill programs.” stated Mark Fedosiewich, President and CEO.

Located 95 kilometers south of Rouyn-Noranda, Quebec, the Belleterre project (Figure 1) includes the option to acquire 100% of the mining titles of the former high-grade Belleterre gold mine which produced more than 750,000 oz at 10.73 g/t Au (source: Sigeom MERN), as well as a significant district-scale land package that extends over a strike length of 37 kilometers. This amounts to a total of 450 high-potential gold claims in the Belleterre volcanic band, covering 25,147 hectares. No significant work has been conducted at Belleterre since the late 1980s due to a highly fragmented ownership structure. Vior’s Belleterre district consolidation will allow it to benefit from a first mover strategy, and apply a rigorous systematic large-scale exploration program using modern technologies along with our new geological models. 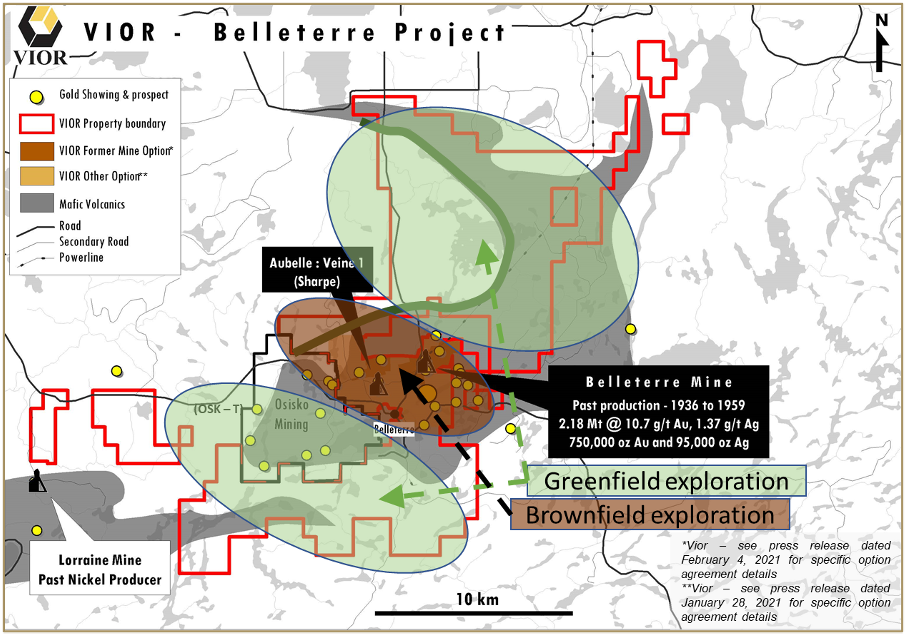 The objective of this field work program is to discover new gold showings and to field-proof Vior’s geological model, as well as to follow-up on any new geophysical targets originating from the high-resolution NOVATEM G2 survey at Belleterre.

The recently completed High Definition Mag – NOVATEM G2 survey covered the entire Belleterre project. This high-resolution magnetic survey will be a valuable exploration tool that will help focus on the continuity of the known historical high-grade zones on strike. In addition, it will also help to delineate potential new under-explored and highly prospective areas of potential gold structures that will be tested by the Corporation throughout the year. A drill program to test the best anomalies is planned for this Fall after field work is completed. This high-resolution helicopter-borne magnetic survey was carried out by the firm Novatem, of Mont-Saint-Hilaire, Quebec with a total of 6,750 linear kilometers with line spacing every 50 meters.

Located approximately 150 kilometres east of Lebel-sur-Quevillon and 75 kilometres south of Chapais, Quebec, the Skyfall project (Figure 2) is 100%-owned by Vior and represents the second district-scale gold project of the Corporation. It consists of 484 claims totalling more than 26,757 hectares and covers a strike length of more than 37 kilometres in the eastern part of the Urban-Barry belt, host to the Windfall gold project (over 6 Moz Au, source: Osisko Mining (‘’Osisko’’) 43-101 Technical Report, dated March 8, 2021), currently being developed by Osisko. 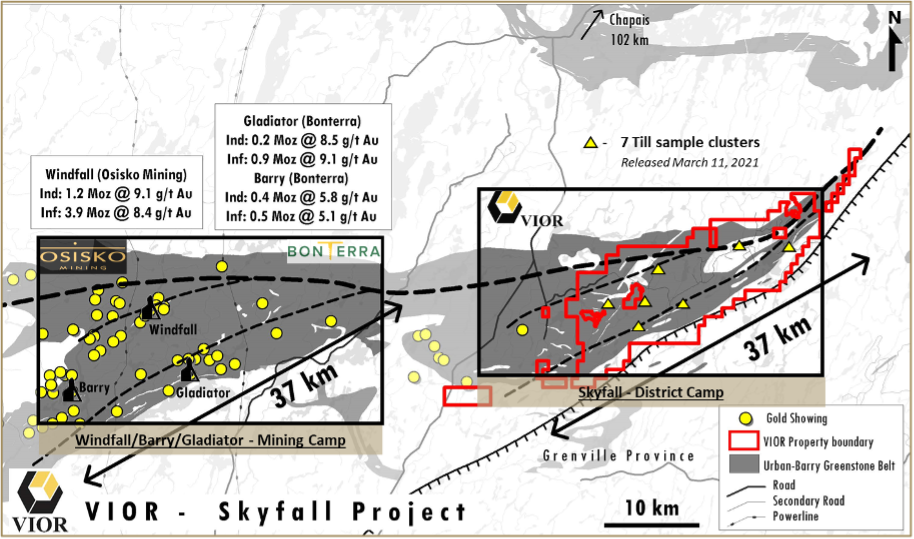 Skyfall is located in an underexplored part of the Urban-Barry volcanic belt. The till sampling results, published, March 11, 2021, have delineated seven distinct till sample clusters, with each cluster containing at least one sample with more than 50 gold grains. Vior has just begun a 4-week comprehensive exploration program that will include prospection, mapping, stripping, channel sampling and till sampling.

Vior is pleased to announce the appointment of Mathieu Guay as Geology Manager and Christian Blanchet as Operations Manager. Their appointments strengthen Vior’s technical team with the skillset and expertise required to execute on its new growth strategy and to conduct extensive field exploration on its projects in Quebec.

Mathieu Guay is a graduate in geology from the University of Quebec at Chicoutimi and a member of the Ordre des géologues du Québec. He has more than 20 years of experience in mining exploration for gold, nickel, PGM and base metals in Quebec, Ontario, Newfoundland, and the United States. Mr. Guay has worked for intermediate companies and major producers such as Richmont Mines, Falconbridge, Inmet Mining and Dundee Precious Metals. He has a diverse experience in mineral exploration, advanced projects, and mining development. He was involved in the discovery and development of the Francoeur West Zone, Wasamac, Island Gold Mine and Val-d’Or East deposits.

Working as Senior Geologist for the Company for the past six years, Christian Blanchet has been promoted to Manager of Operations. Christian is a member of the Ordre des géologues du Québec, overseeing the Corporation’s projects in the field, while developing relationships with local stakeholders. His professional experience since 1994 includes various operational and management positions at both major companies (Falconbridge and Rio Tinto), junior exploration companies, as well as several consulting firms.

Finally, Vior would like to thank Mr. Marc L’Heureux for his many dedicated years of service as he heads into retirement from his role as Vice-President of Exploration. Mr. L’Heureux has been instrumental in guiding the Corporation through these last 10 years and most notably during this past year’s rapid growth and acquisition phase.He will remain with the Corporation as a Technical Advisor.

Laurent Eustache, Vice President of Corporate Development, has been appointed as Executive Vice President of the Corporation. “Following the appointment of our two highly experienced Managers, and Marc L’Heureux’s transition to Technical Advisor, I believe that Vior has all of the expertise required to move its flagship projects forward into the next development stage” stated Laurent Eustache.

The technical content disclosed in this press release was reviewed and approved by Mr. Laurent Eustache, P.Geo., who is the Corporation’s Qualified Person as per NI 43-101.