Montreal, Quebec, March 11, 2021 – VIOR INC. (“Vior” or the “Corporation”) (TSX-V: VIO, FRANKFURT: VL51) is pleased to report high gold grain counts in samples from its first reconnaissance till sampling program conducted in this area in the fall of 2020. The Skyfall project is located approximately 150 kilometres east of Lebel-sur-Quevillon and 75 kilometres south of Chapais, Quebec. The project was developed by Vior over the past six months, via property consolidation, claim acquisition and map designation.

“The significance of these results, during a preliminary phase of exploration, is tremendous as it demonstrates that the geology in the eastern extension of this belt is just as prospective. The results obtained exceed all expectations, with 7 clusters of till samples showing high gold grain counts up to 132 and also including significant counts of pristine gold grains, which indicate that a source of gold mineralization is nearby. In light of these results, the Skyfall project will be the focus of a major exploration program during 2021”, stated Marc L’Heureux, VP Exploration for the Corporation.

A total of 160 till samples, averaging 10 kilograms each, were collected in the field along a series of traverses oriented WNW-ESE and E-W, with sampling lines spaced approximately 2.0 to 2.5 kilometres apart, perpendicular to the dominant glacial flow direction, with a spacing of approximately 350 metres between samples. Overall, 71% of collected samples were described as basal till, the remainder mainly composed of a mixture of basal till and melt-out till. The till sampling program was conducted by IOS Services Géoscientifiques, and the morphology of gold grains was identified using high-definition ARTPhot optical recognition technology (click here to see photos of gold grains). 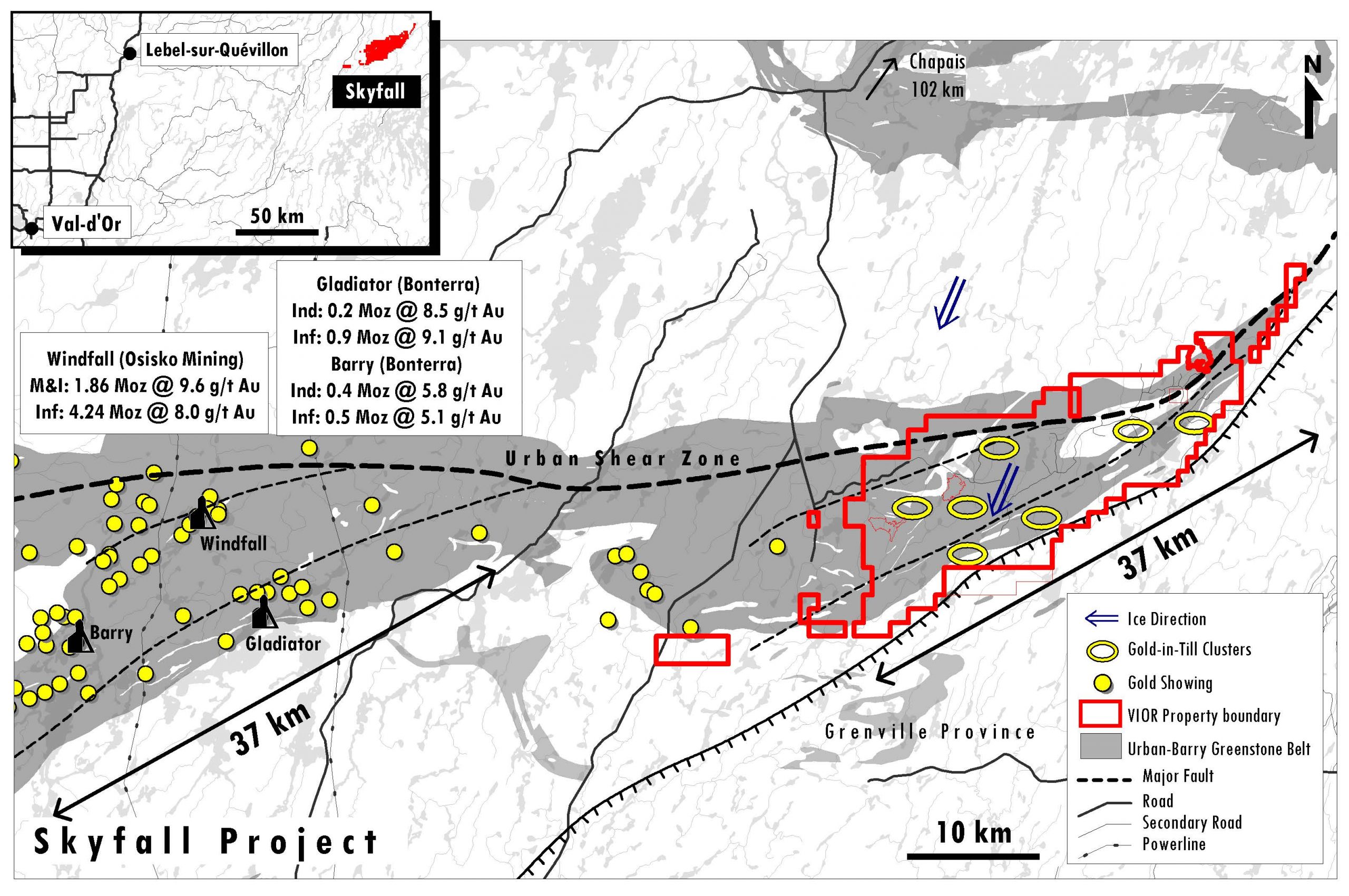 Each cluster is 350 metres to 1.2 kilometres wide and appears to coincide, based on aeromagnetic data, with structurally complex zones that may have facilitated hydrothermal fluid circulation and deposition of gold mineralization. All till clusters include at least one sample containing between 50 and 132 gold grains, including pristine gold grain counts ranging from 10 to 39. The source area of gold grains observed in till samples remains open over a distance of at least 2 kilometres up-ice, which will require follow-up sampling to better define the source of this gold mineralization.

At the time the till sampling program was conducted in the fall of 2020, the Skyfall project covered 152 square kilometres, compared to the 253 square kilometres it covers today. The Corporation is thus planning to extend the reconnaissance till survey to cover the 101 square kilometres recently added to the property, and to conduct follow-up till sampling along a tighter grid spacing up-ice from the 7 till clusters with anomalous gold grain counts. Airborne and ground geophysics are also planned in several parts of the property with no previous coverage. A geological prospecting and reconnaissance program including rock and soil sampling will be undertaken in the early summer of 2021. 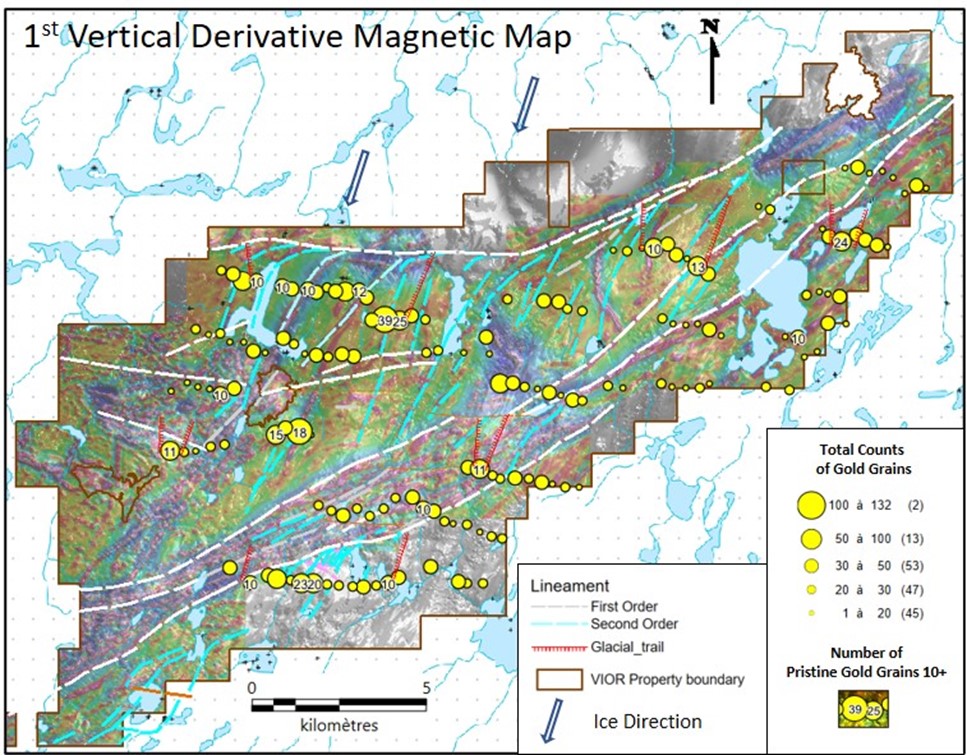 “Prior to this first till survey, no geochemical surveys and only one drill hole were reported on the property. Access roads recently developed by logging companies, and the favourable location in the geological continuity of high-grade projects held by Osisko Mining Inc. and Bonterra Resources Inc. convinced us to undertake the consolidation of a major land position in this belt. These factors fully meet our corporate project development criteria to reduce exploration risks and costs in order to significantly increase the potential return on investment for our shareholders”, stated Mark Fedosiewich, President of Vior.

The Skyfall project is located approximately 40 kilometres east of the Windfall deposit held by Osisko Mining Inc. and the Barry and Gladiator deposits held by Bonterra Resources Inc. (see figure, resources as per Osisko and Bonterra websites), in an underexplored part of the Urban-Barry volcanic belt. The geological setting of the project is similar to that of the central part of the Urban-Barry belt, which hosts a number of gold showings and deposits. However, mineralization occurring on properties in the Urban-Barry area is not necessarily indicative of mineralization that may be found on the Skyfall property held by Vior.

Vior acquired from an independent prospector 100% interest in a claim block totalling 4 claims covering 233 hectares, in exchange for a cash payment of $1,000 and the issuance of 20,000 shares of the Corporation. A 1% Net Smelter Return (“NSR”) royalty is granted to the vendor, half of which may be repurchased for $250,000. The transaction is subject to the approval of the TSX Venture Exchange.

The technical content disclosed in this press release was reviewed and approved by Mr. Marc L’Heureux, P.Geo., who is the Corporation’s Qualified Person as per NI 43-101.