December 21, 2022 – VIOR INC. (“VIOR” or the “Corporation”), (TSX-V: VIO, OTC: VIORF and FRANKFURT: VL51) is pleased to announce that it has signed a Letter of Intent (the “LOI”) with SOQUEM Inc. (“SOQUEM”), a subsidiary of Investissement Québec, on its recently consolidated Skyfall Nickel project (“Skyfall” or the “Project”), located in the Abitibi Greenstone Belt, Québec, see fig. 1.

The LOI outlines the principal terms and conditions that will form the basis for a definitive Option Agreement (the “Agreement”) between VIOR and SOQUEM; providing SOQUEM with the right to acquire a 50% undivided interest in the Project, and if the Option is exercised by SOQUEM, the LOI outlines the principle terms of a future Joint Venture Agreement between VIOR and SOQUEM. The parties agree that an Agreement will be finalized and executed on or before January 25, 2023 and will be subject to the typical customary conditions, including receipt of all regulatory approvals.

Mark Fedosiewich, President and CEO of VIOR, stated: “We are very excited to have a strong partner like SOQUEM to help support our efforts and to validate the potential at our Skyfall Nickel project. This Agreement is expected to provide VIOR shareholders with a strengthened financial position, allowing us to better focus and allocate capital in our overall exploration efforts, in particular at our flagship Belleterre gold project. This partnership with SOQUEM, a well-financed and socially responsible exploration company in Quebec, demonstrates the Quebec Government’s strong commitment to aggressively explore and develop high-potential strategic metals projects for the North American battery metals market.”

Mr. Fedosiewich continues, “Also, it is important for VIOR shareholders to note, that while the execution of a definitive Agreement will provide another great value creation opportunity to advance the Nickel potential at Skyfall, we remain firmly committed to rapidly advancing our flagship Belleterre gold project in Quebec. Our technical team is intently working towards completing the data compilation program, a new regional litho-structural model, and an aggressive drill targeting initiative and presentation for early 2023”.

The Skyfall Nickel project is located in Quebec, approximately 150 kilometres (“km”) east of Lebel-Sur-Quevillon and 102 kms south of Chapais. The Project, consisting of 925 claims has been consolidated by VIOR over the past two years via numerous property acquisitions and map claim designations. When the consolidation of the Skyfall project began in early 2020, VIOR recognized its considerable gold mineralization potential, as it is situated east of Osisko Mining’s seven million ounce gold Windfall project (source: Osisko Mining’s (‘’Osisko’’) Windfall MRE dated June 7,2022) in the Urban-Barry greenstone belt. This region is known for its gold deposits, and the Skyfall project still has the potential to be an extension of the urban deformation zone.

However, following the 2022 field season, VIOR recognized that the Skyfall project, covering an area of 51,515 ha (or 515 sq.km.), encompasses the entire geological assemblage of a favorable host for potential nickel deposits not previously known. It is this shift in geological potential that has convinced the team at SOQUEM to pursue a partnership that will help to rapidly advance the understanding of Skyfall’s district-scale potential and unlock the untapped possibilities of this promising region.

According to the LOI, SOQUEM will have the option to acquire a 50% undivided interest in the Project for a period of two (2) years beginning April 1, 2023, by fulfilling the following conditions:

2. Cash payments to VIOR totalling $350,000 as per the following schedule:

VIOR will be the Operator. Upon satisfaction of all financial obligations required by SOQUEM to earn their 50% interest in the Project, the parties will then execute a Joint Venture Agreement for the Project with all terms and conditions to be set out in the final Agreement.

Further updates will be provided upon execution of a definitive Agreement, and there is no assurance that an Agreement will be completed as proposed.

MORE ABOUT THE SKYFALL NICKEL PROJECT

The Skyfall project is accessed by all season logging roads and is proximal to hydroelectric lines, and lodging. In the southern part of the Project, the bedrock exposer is extensive and easily accessible, which allows for cost-efficient exploration. Overall, the Project’s location and favorable exploration conditions provide for a significant competitive advantage. To learn more about Skyfall Nickel Project. 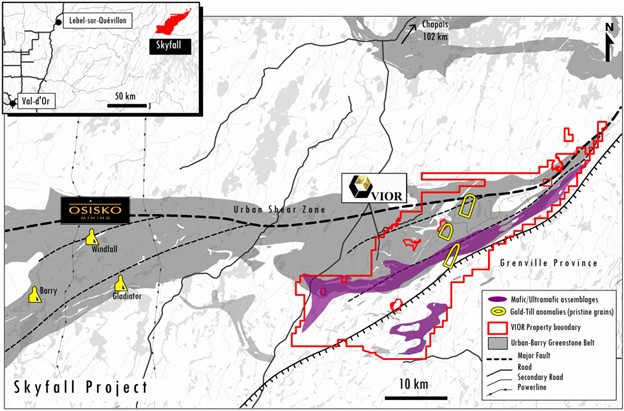 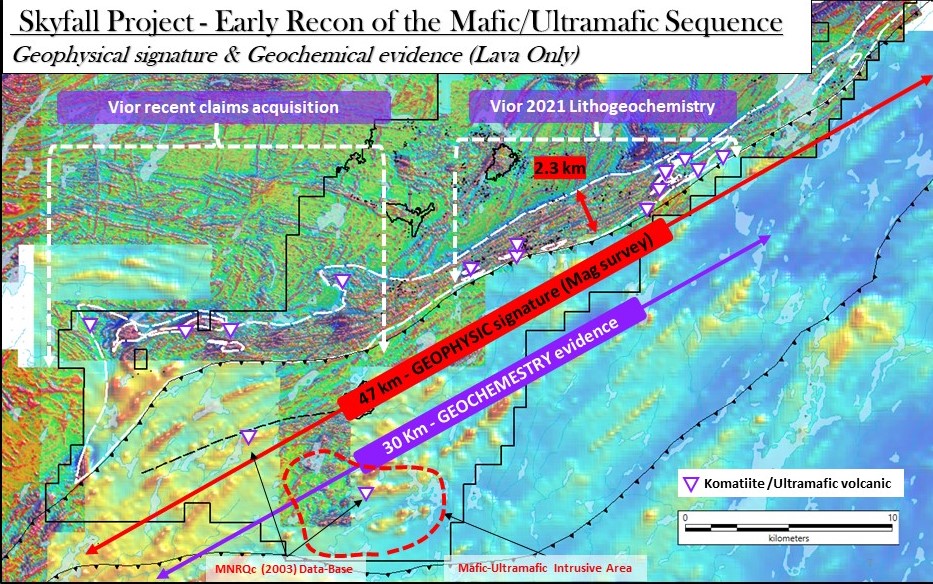 ABOUT THE NICKEL MARKET AND DEMAND

Nickel has been recognized as a strategically important metal by the US and Canadian governments ,and is considered a valuable mineral for the future in Quebec. The rapidly increasing demand for electric vehicles (EVs) is expected to lead to persistent supply shortages for metal in the North American market, due in part to the unreliable and unsustainable practices of some nickel production sources. The market for nickel is currently experiencing a super cycle, providing an opportunity for VIOR investors to benefit from potential new discoveries in the battery metals sector.

VIOR is a hybrid junior mining exploration company based in Quebec, whose corporate strategy is to generate, explore and develop high-quality projects in proven and favourable mining jurisdictions in North America. Through the years, VIOR’s management and technical teams have demonstrated their ability to discover several gold deposits and many high-quality mineral prospects.

SOQUEM, a subsidiary of Investissement Québec, is dedicated to promoting the exploration, discovery and development of mining properties in Quebec. SOQUEM also contributes to maintaining strong local economies. A proud partner and ambassador for the development of Quebec’s mineral wealth, SOQUEM relies on innovation, research, and strategic minerals to be well-positioned for the future.

The technical content disclosed in this press release was reviewed and approved by Laurent Eustache, Executive Vice-President for VIOR and Qualified Person as per NI 43-101.