Montreal, Canada, August 25, 2021 – Vior Inc. (“Vior” or the “Corporation”), (TSX-V:VIO, FRANKFURT:VL51) is pleased to announce that it has entered into an Option Agreement (the “Option”) with Osisko Mining Inc. (“Osisko”) for their Blondeau-Guillet gold property (the “Property”) in the Belleterre region of Abitibi-Témiscamingue, located 95 km south of Rouyn-Noranda, Quebec. The Property consists of 74 claims covering 3,573.65 hectares (35.74 sq km) and adjacent to Vior’s existing district-scale land package now totalling 531 claims covering 29,129.48 hectares (291.30 sq km).

“This Option is very strategic for Vior as it fully-consolidates our district-scale gold project at Belleterre and allows us to focus on the continuities of the gold system in the brownfield areas of our project. We are very pleased to partner with Osisko, a high-quality partner who has an excellent track record of success in Quebec for exploring, project development and value creation for its stakeholders.” stated Mark Fedosiewich, President & CEO of Vior.

About the Option Agreement:

Osisko has agreed to grant to Vior the exclusive and irrevocable right to acquire a 51% undivided interest (which may be increased to 75%) in the Property.

Vior shall have the right until the 3rd(third) anniversary of this Option to acquire a 51% undivided interest in the Property (the “First Option”) by:

(a) issuing common shares to Osisko for a value totalling $225,000 in accordance with the following schedule:

Subject to the prior exercise of the First Option, Vior shall have the right to acquire an additional 24% undivided interest in the Property (the “Second Option”) by incurring additional Work Commitments totalling at least $1,750,000 over a three-year period.

Upon satisfaction of the Option, Vior and Osisko will form an industry standard joint venture agreement (the “Joint Venture”) on the property with Vior acting as the operator of the Joint Venture to carry on operations with respect to the Property. 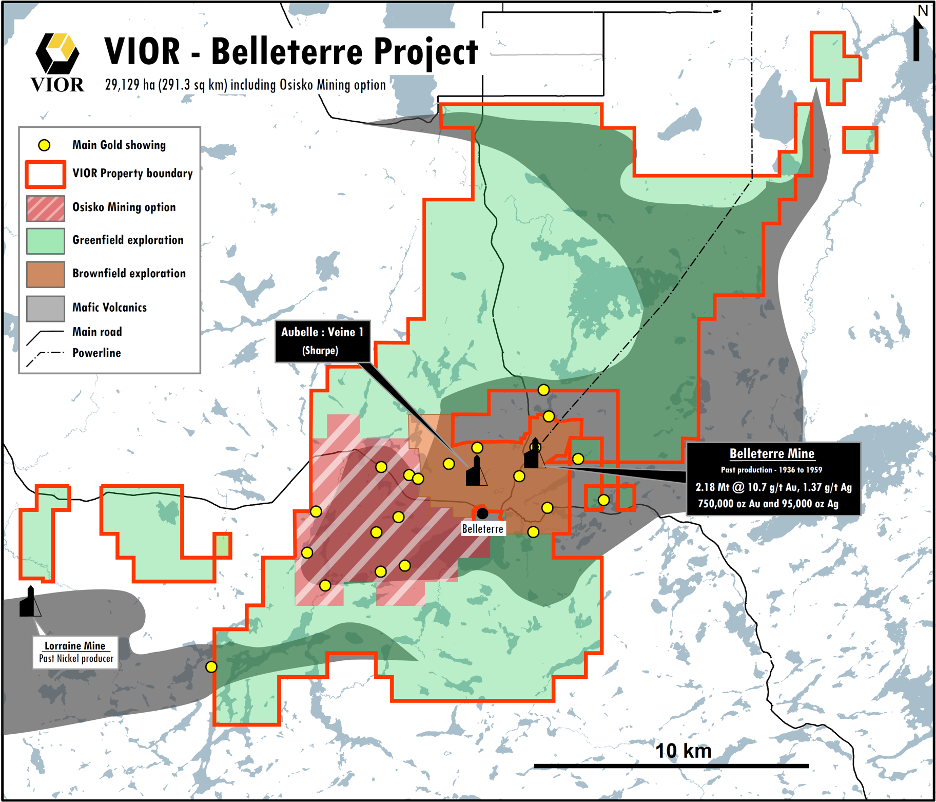 Vior is also pleased to announce that it has retained the technical firm – 3DGeo Solution Inc – under the leadership of Kenneth (Ken) Williamson, MSc, PGeo, to assist in a Phase 1 structural modelling and drill targeting mandate. Ken is a Senior consulting and structural geologist with over 15 years experience in Exploration and Mining geology; specializing in 3D litho-structural modelling and mineral resource targeting and estimation. “Ken’s expertise and record of success is well recognized in the Abitibi and North America. Working alongside Vior’s technical team, Ken will help develop a comprehensive structural model encompassing the old and the newly acquired field geologic data set, as well as drill target generation for our upcoming Fall drilling program.” stated Laurent Eustache, Executive VP.

Following the Phase 1 mandate, 3DGeo Solution Inc. will focus on a second Phase mandate to create a 3D Geo-model of the past producing areas of the Belleterre project. “We are excited to initiate work and join forces with Vior’s technical team on their promising Belleterre project. Vior has mandated us to focus on the Brownfield areas at Belleterre, including the high-grade past producing Belleterre mine. Such collaboration will allow us to revisit historical data and interpretations using modern tools, and we are very confident that it will to unlock the full economic potential of the property” stated Kenneth Williamson, President of 3DGeo Solution Inc.

In addition and subject to regulatory approval, Vior has retained Greg Ferron (the “Consultant”) to provide investor relations services. Mr. Ferron will receive $4,000 per month for an initial six months period, which term can be extended by mutual consent. Pursuant to its stock option plan, Vior has granted 150,000 stock options to the Consultant at an exercise price of $0.20 per share, exercisable for a period of five years and vesting as to 1/4 of the options granted every three months.