VIOR Consolidates its Land Position at Skyfall, in the Urban-Barry Belt, Abitibi, Qubec

Montreal, Quebec, February 2, 2021 – VIOR INC. (“Vior” or the “Corporation”) (TSX-V: VIO, FRANKFURT: VL51) is pleased to report the acquisition, through purchase agreements and map designation, of 100% interest in 119 additional claims at the Skyfall project, thereby expanding its land position to 456 claims covering a total surface area of 25,280 hectares. The Skyfall project is located in the eastern part of the Urban-Barry gold belt, approximately 150 kilometres east of Lebel-sur-Quevillon and 75 kilometres south of Chapais, Quebec.

“These new acquisitions expand the Skyfall project and provide access to a property portfolio with strong gold potential extending for more than 37 kilometres within the Urban-Barry belt, which hosts Osisko Mining’s (5 M oz+, Osisko Mining website) Windfall Gold project, currently in the development phase. The results of a recently completed (late Fall 2020) till survey are expected shortly and our field crew is currently preparing for the 2021 exploration program, which will include systematic prospecting, follow-up rock and till sampling, and geophysical surveys. This work will help to set the table for a targeted drill program that we hope to launch as soon as possible”, stated Marc L’Heureux, VP Exploration for Vior. 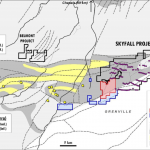 The Skyfall project is located in an underexplored part of the Urban-Barry volcanic belt, approximately 40 kilometres east of the Windfall gold deposit held by Osisko Mining Inc. and the Gladiator deposit held by Bonterra Resources Inc. (see figure, resources as per Osisko and Bonterra websites). The geological setting of the project is similar to that of the central part of the Urban-Barry belt, which hosts a number of gold deposits and showings (please note however, that mineralization occurring on properties in the Urban-Barry area is not necessarily representative of mineralization that may be found on the Skyfall property held by Vior).

Till sampling results are currently being validated through routine quality control (QA/QC) procedures and are expected shortly. Gold grain counts will be used to guide part of the next round of exploration. The 2021 exploration program on Skyfall is currently in preparation and will be announced in the coming weeks. It will include a systematic prospecting campaign, sampling of bedrock and secondary environments, as well as airborne and ground geophysics.

Vior acquired, from North American Exploration Inc. and a prospector, 100% interest in a block of 40 claims covering 2,230 hectares (in red in the figure above) in exchange for a cash payment of $7,500 and the issuance of 150,000 shares of the Corporation. A 2% Net Smelter Return (“NSR”) royalty has been granted to the vendor, half of which may be repurchased for $1 million. This transaction is subject to the acceptance and approval of the TSX Venture Exchange.

Vior also acquired 100% interest in a total of 43 claims in 5 blocks, covering 2,428 hectares (in blue in the figure above), from an independent consultant in exchange for a cash payment of $4,911. This amount has also included some contract consulting fees.

In parallel, the Corporation map-designated 36 claims over the past few weeks on the Skyfall project, scattered along the perimeter of the project.

Finally, the Corporation transferred a group of 40 claims that were initially included in the acquisition announced on December 2, 2020 of six claim blocks relating to the Skyfall project. The two claim blocks totalling 40 claims will now form the Belmont project (illustrated in the figure above), located approximately 20 kilometres northeast of Windfall. The Corporation intends to prepare an exploration program shortly for the Belmont project.