QUEBEC, CANADA, September 23rd, 2020 – SOCIÉTÉ D’EXPLORATION MINIÈRE VIOR INC. (« Vior » or the « Corporation »), (TSX-V: VIO, FRANKFURT: VL51) – is pleased to announce the acquisition of a new gold project in the Lake Mirabelli area, located approximately 300 kilometers north of town of Matagami, in the James Bay region of Quebec. The Mirabelli project consists of two separate blocks, the North and the South, located near the James Bay Road and covering an area of 75.6 km2 for a total of 142 claims, of which 56 are currently in process.

The Mirabelli project is characterized by the presence anomalous gold grain counts in till samples. Counts of up to 40 grains of gold have historically been obtained from heavy mineral concentrates in the North Block, while a count of 57 gold grains was obtained in the South Block, including 3 pristine grains. More recently, a validation till sampling program carried out at 9 sites located near the historical samples of the North Block, provided varying counts of between 3 and 82 gold grains for an average of 18 gold grains over a 3 km2 area. The area covered by the North and South Blocks of Mirabelli encompasses the potential source region of gold-in-till samples in the glacial up-ice direction to the northeast. 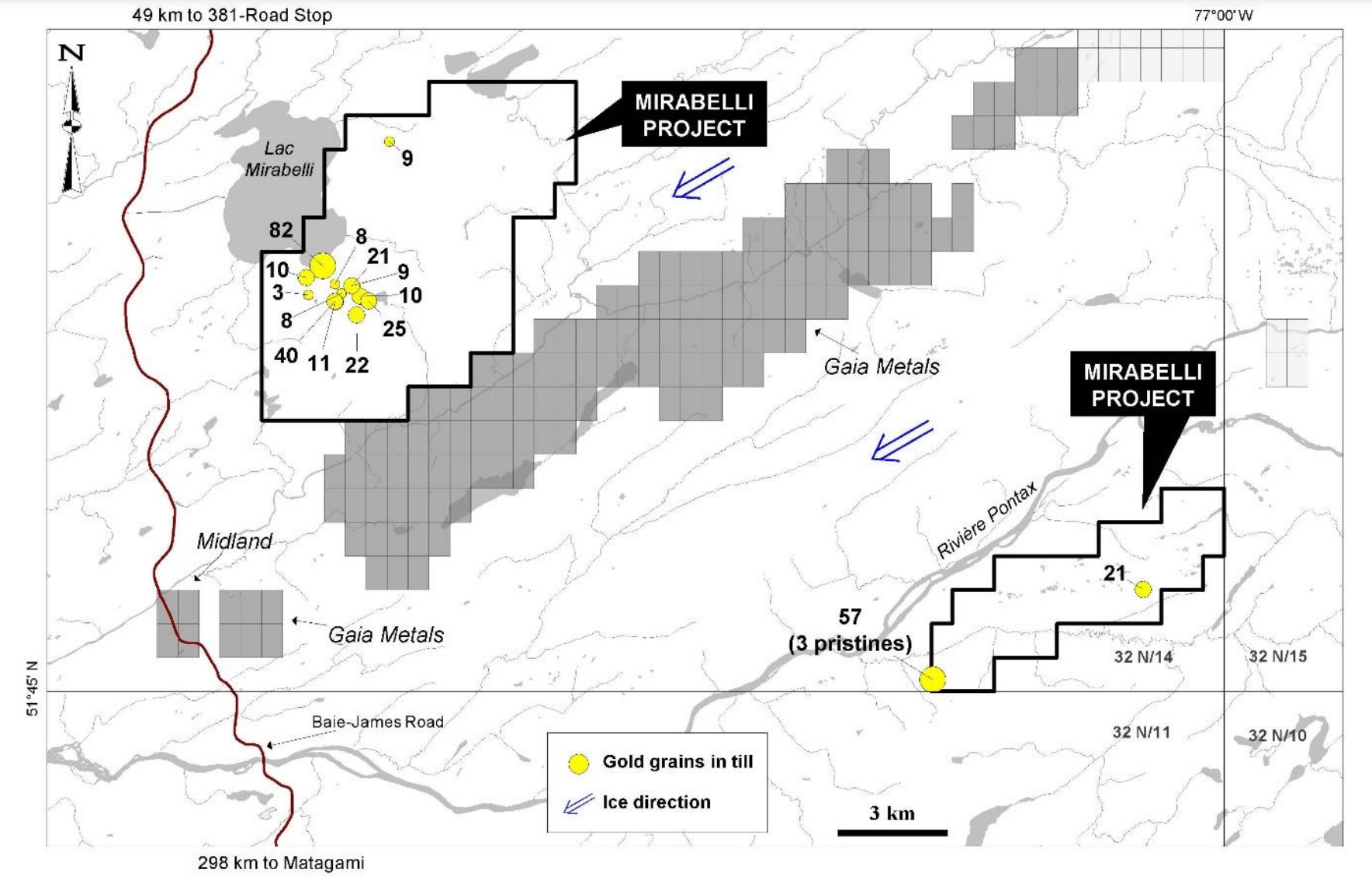 Mirabelli’s North and South blocks are located near the contact zone between the geological subprovinces of Nemiscau and La Grande, where several gold prospects and deposits are found in the Eastmain River sector. Aerial magnetic data from the North block of Mirabelli suggests the presence of a band of volcanic rocks or iron formations, trending N060, which would extend for more than 16 kilometers.

The Corporation is planning to carry out till sampling lines this fall to better define the source area of the gold grains on Mirabelli. In preparation for this program, the Corporation has initiated, through an independent consultant, the processing of historical aerial geophysical data in order to better optimize the collection of till samples. A follow-up prospecting program will be carried out in Summer 2021.

Vior acquired the Mirabelli project in a non-arm’s length transaction from two co-owners of the Mirabelli project (the “Vendors”), one of whom is Mr. Eric Desaulniers, a member of the Corporation’s Board of Directors. Under the asset purchase agreement (the “Agreement”), Vior can acquire a 100% interest in the Mirabelli project by making payments totaling $ 50,000 over a twelve-month period and completing exploration expenditures totaling $ 225,000 over a twentyfour-month period. The Vendors will retain a 2% NSR royalty, half of which can be repurchased for $ 1 million. In addition, the Corporation shall pay to the Vendors the following milestone payments upon the occurrence of the following events, if and when such events occur: $250,000 in cash or at the election of Vior, in shares, upon the completion of a resource estimate on the project and $1,000,000 in cash or at the election of Vior, in shares, upon completion of a feasibility study on the project. Should Vior elect to pay these milestone payments in shares, such payments will be subject to the prior approval of the disinterested shareholders of Vior. The TSX Venture Exchange has conditionally accepted this transaction, with the exception of the milestone payments which will be subject to further regulatory approval, subject to the Corporation filing certain compliance documents, including the issuance of the present news release, on or before November 18, 2020.

In light of the participation of Mr. Desaulniers, a Director of Vior, in this transaction, the entering into the Agreement is considered to be a related party transaction under Multilateral Instrument 61-101, but is exempted from the requirements to obtain a formal valuation and to obtain minority approval, as the consideration payable to the related party under the Agreement does not exceed 25% of Vior’s market capitalization. The independent directors of Vior have approved the Agreement. The Company is relying on exemptions from the formal valuation and minority shareholder approval requirements provided under sections 5.5(a) and 5.7(1)(a) of Multilateral Instrument 61-101.

In other news and in connection with the Skyfall project (see Press Release dated August 24, 2020), Vior wishes to clarify that a cash payment of $3,300 and the issuance of 100,000 shares of the Corporation were made to two prospectors for 35 claims.