QUEBEC, CANADA, August 24 th , 2020 – SOCIÉTÉ D’EXPLORATION MINIÈRE VIOR INC. (TSX-V: VIO, FRANKFURT: VL51) – wishes to announce the acquisition of a 100%-interest in 50 additional claims adjacent to the Skyfall project, in the eastern part of the Urban-Barry gold belt, located approximately 150 kilometers east of Lebel-sur-Quevillon and 75 kilometers to the south of Chapais, Quebec. These new claims are in addition to the 215 existing, bringing Vior’s total claims package to 265 claims. The Skyfall project now encompasses an area of 149.3 square kilometers, making it one of the largest land positions held by a company in the UrbanBarry volcanic belt.

The Skyfall project is located in an under-explored area of the Urban-Barry volcanic belt, approximately 40 kilometers east of Osisko Mining’s Windfall, and Bonterra Resources’ Barry and Gladiator gold deposits (see figure, reference to Mineral Resources is taken from Osisko Mining and Bonterra Resources websites). The project is covered by sequences of volcanic rocks crosscut by series of faults oriented sub-parallel to the stratigraphy or trending northnortheast in which gold mineralization is often associated in the area. 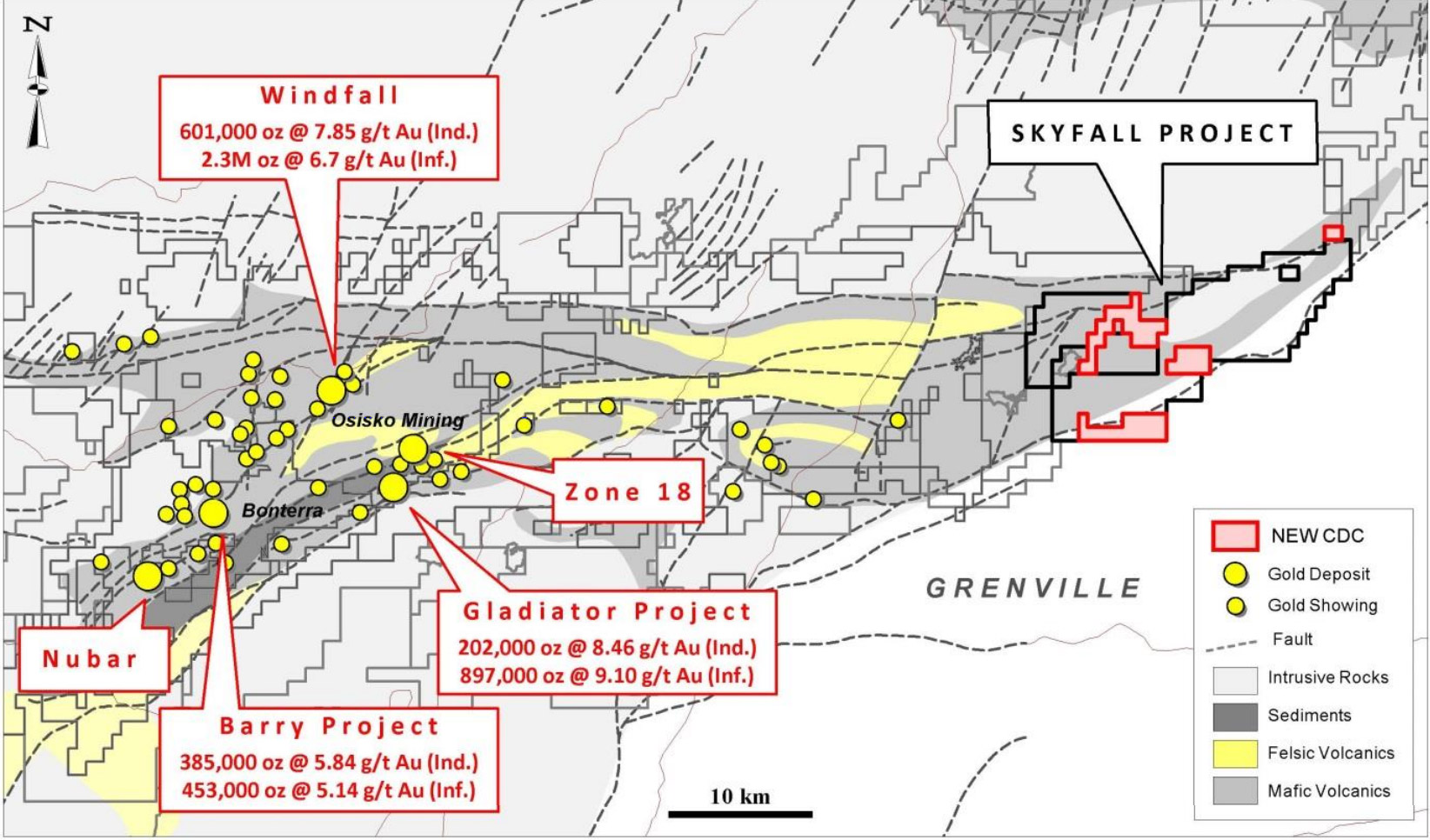 Due to its limited land access until a few years ago, very little exploration work has been done on Skyfall. The project shows a geological environment similar to that of the central part of the Urban-Barry belt in which we find many gold deposits and showings (please note however that the mineralization hosted on adjacent and/or nearby properties is not necessarily indicative of mineralization hosted on the Company’s property).

Vior has acquired a 100% interest in 50 new claims. A cash payment and the issuance of shares has been made to one of two sellers for 35 claims, while a cash payment was made to the other seller for 12 claims. The remaining 3 claims were acquired by map designation. A 2% net smelter return (“NSR”) has been granted to the two sellers, of which 1% may be repurchased from one of the sellers. The acquisition of 35 of the claims will be subject to TSX-V approval.

A comprehensive exploration program will begin on Skyfall in late August, 2020. This will include a first phase of systematic till sampling, as well as geological field prospecting, including rock sampling. A second phase of work is also scheduled for Fall 2020 on the new gold targets generated.