During the month of August, the Company completed an 18.4 line-kilometer dipole-dipole induced polarization (“IP”) geophysical survey on the northern and western extensions of the IP grid carried out in 2017 (see figure below). The purpose of the survey was to cover the area of the Morono ”M” gold deposit as well as the area along the sheared contact zone to the north. This sheared contact zone lies between the Wilson intrusion and the volcanic rocks, which is the host to several gold prospects and showings on Mosseau. The new IP survey has identified at least 8 new drill targets in addition to the 12 targets that had been identified during the 2017 survey (of which several remain untested).

The new IP anomalies were followed up by prospecting and field mapping during which mineralized rock samples were collected. The assay results are expected in September. Some mineralized outcrops and other sites corresponding to chargeability PP anomalies have also been identified in preparation for outcrop stripping to be held later this fall. The stripping work will help to better characterize the mineralized zones on surface and at validating the IP anomalies.

A drill campaign is now scheduled for Winter 2020-2021 to test the IP anomalies located in the extensions of known gold mineralization associated with shear zones. Some drilling will look to confirm the gold mineralization along the Morono ”M” deposit zone, as well as the ”R”, ”S”, and ”P” gold zones which are parallel to Morono.

The Mosseau gold project is 100% owned by Vior and consists of 73 claims covering an area of 36.8 square kilometers. The project is considered to be highly prospective due to (1): the presence of the Morono ‘’M” historic gold mineral resource (see press release dated March 22, 2017), and (2) the presence several gold showings and drill intercepts associated with shear zones often coincident with chargeability anomalies, that can be traced over a strike length of more than 10 kilometers. Mosseau is surrounded to the west by Osisko Mining and to the northwest by Soquem’s Verneuil project and Cartier Resources Wilson project.

In 2017, Vior discovered a new gold zone that was intersected in hole MO-17-10 which targeted an IP chargeability anomaly located 800 meters northwest and on-trend with the KC-1 surface showing where a selected rock sample returned 12.1 g/t Au (press release of March 14, 2018). The new discovery was located north and parallel to the northwest-southeast-trending Kiask River Fault Zone that crosses the Property. Hole MO-17-10 intersected 1.13 g/t Au over 14.5 meters (40.0 to 56.0 m core length), including 2.93 g/t Au over 4.53 meters, including an interval of 7.41 PRESS RELEASE – 2 – g/t Au over 0.91 meter (assays are reported in true thicknesses). The discovery of this new gold zone opened a significant prospective area with a minimum strike length of 900 meters that remains largely unexplored and open in all directions. 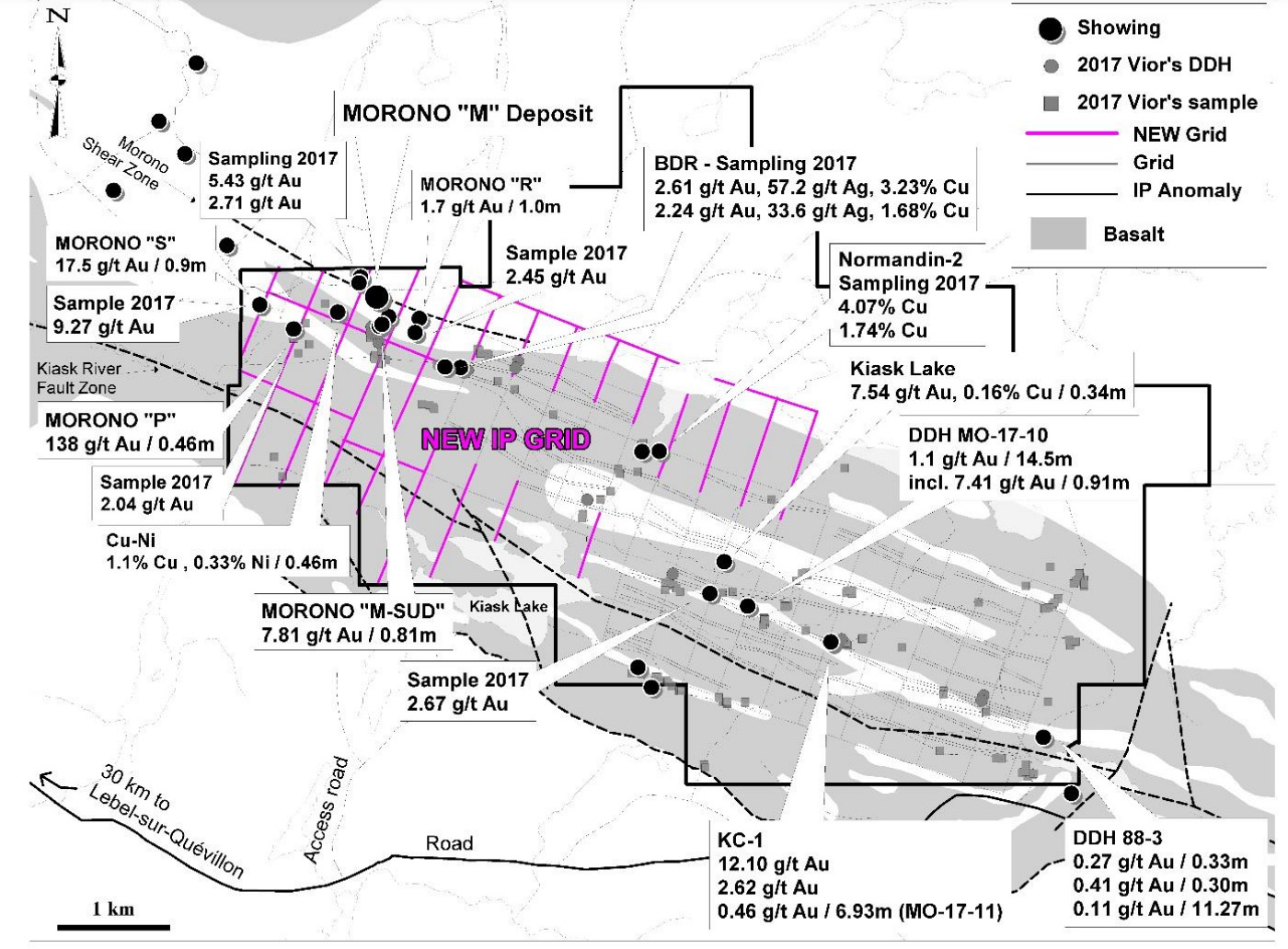